After having a nice post meet and greet dinner out on St Marks street with fellow campers last night I was woken up by one of my dorm mates at 7 am. He is doing an internship at Goldman Sachs. I had so much on my mind I wanted to jump up and write it down in my sketchbook but I realized that I misplaced it. I could not go back to sleep until 11. At noon I woke to a text from my friend Eva one of my favorite artists who is also the person who told me about ITP summer camp (she is alumni) for an invite to lunch down in the heart(bowels?) of the city’s government. After consulting the googles for initial transit directions I was only lost for about an hour. (Lesson: use a map and pay attention to where you are). I was late and the food was expensive for no good reason but that wasn’t the point, the point was to see my friend, which was awesome .

Eva pointed me at several resources and told me about the figment project on governors island where she is taking her inflatable cowfish sparky to this weekend. After a nice visit I walked to Broadway and then up to Canal Street where I followed up on last years global geek walking tour of New York from the open hardware summit. I stopped at a few over priced electronics shops and the two remaining canal street electronics surplus shops that I remember from my first trip to NYC in the mid 80s (Argo electronics and (269) Electronics Inc).

I bought some awesome stomp switches.

In between them I found Canal Plastics where I picked up some material to learn to cut with the laser cutter.

By this time it was late in the afternoon so I took the train from broadway and canal to 8th and got a locker for my new found materials and hydrated several times before going to the bookstore for another sketchbook and to check out the electronics selection at the computer store (I realized I was going to have to mail order or dig around for what I need in the next few weeks).

By that time it was time for the max/msp/jitter class. I wanted to take all of the classes today but they were all overlapping. So I went to the max class. I realized that most of what I knew about PD translated roughly to what Scott was teaching though it was nice getting a comparison and contrast. Fortunately the meat of what I really wanted should be covered on Thursday.
So I snuck off to the pop up books. I probably would have not done this but 1. part of the point of this camp is to do things I wouldn’t do and, 2 I had a student this year who’s project proposal was to build exactly this kind of book for his newborn.

Ms. Jenkins started off with a presentation which kicked all powerpoints in the keaster. Not only would I would have loved to see the talk that she says started her down this path but I thought it moved the consciousness beyond the ordinary and therefor totally met Dick Ibach‘s criteria for good art. I am especially glad that she gave us the links for the works of Jie Qi and the other things she claims to have stolen. (I teach my students that in physical computing you do not steal, you share, and if you make them work for you, you own them….) I am pretty sure I can reconstruct the second half of her class but it was extremely hard to leave for the Processing class. I was not alone in wanting to take this particular class since when the max class got out we had to move to the larger room and by the time it was done I was completely spent. Part of me was still trying to figure out if it would have been better if the classes had been spread out. I decided I had just had the best of all possible worlds. After having a beer and watching Pa(h?)r start his cb550 I went back to where I ate last night. My sketchbook was still there. It was the perfect end to an awesome day .. 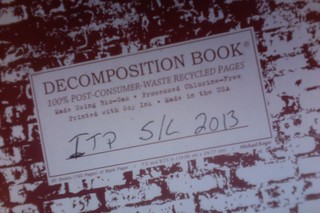